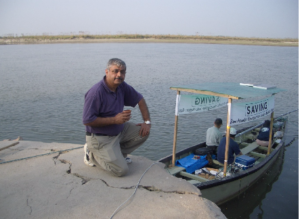 Rajendar Bahl is a Professor at the Centre for Applied Research in Electronics (CARE), IIT Delhi where he has been working since 1974. He has a B.Tech (Honours) in Electronics and Electrical Communication Engineering from IIT Kharagpur (1974) and Ph.D (EE) from IIT Delhi (1982). He has been a past Head of CARE during 1996-99, and a founder-member of the Naval Research Board. He has participated in various national bodies of the Department of Electronics, Ministry of Information Technology, and the Defence Research & Development Organization. He won a Senior Fellowship award of the US National Research Council during 1989-90 at the Naval Postgraduate School, Monterey. He has also been a Visiting Professor in the field of bio-acoustics at the Institute of Industrial Science, University of Tokyo, Japan during 2002-2004.

As President of India Chapter of IEEE Oceanic Engineering Society, he has been instrumental in organizing the International Symposium on Underwater Technology, UT-15 at Chennai, India. His major expertise is in Sonar design and he has implemented a number of projects in this area. He has developed several systems and proven them in the field. He was jointly awarded the 1982 Invention Award of the National Research & Development Corporation for the indigenous development of a Digital Control System for INS Vikrant. He is the recipient of Commendation Medal of the Chief of the Naval Staff.